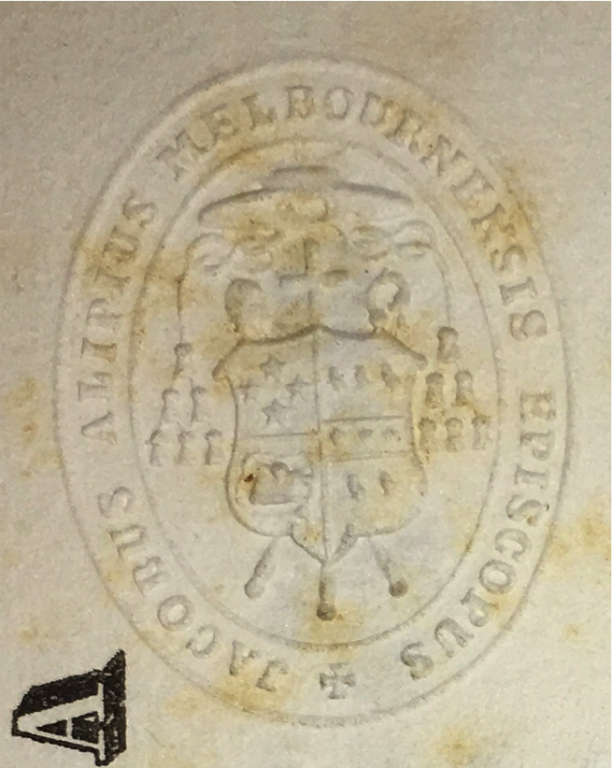 There are a number of ways that Mannix Library has identified books that previously belonged to James Alipius Goold’s personal library. The various identifying markings that indicate prior Goold ownership are mostly located on the title page of each book. These have been summarised in a document produced by Mannix Library that also includes an image of each example. The most common ways of identifying items include:

In an attempt to identify all items that may have once belonged to Goold, Mannix Library has systematically checked all items in its collection published prior to his death in 1886 for evidence of Goold ownership. Initially items from the Rare Books and Early Imprint Collections were inspected. Reports were then produced of all items in the library’s Reference, Main and Stacks collections published prior to 1887, and these items were also individually examined. As library staff became familiar with the “look” of a Goold book, a number of additional items were also discovered among previously uncatalogued materials.

In addition to checking for marks of Goold ownership suspected Goold items were also checked against the inventory of Goold’s library that was compiled in the mid-1860s. Not all items which include Goold’s signature or imprint were also listed in this inventory. It is assumed that these items may have been later additions to Goold’s library, and added to his collection sometime between when the inventory was created and his death in 1886. There are also some items that are included in the inventory but which do not include any of the usual marks of Goold ownership. Instead of Goold’s signature some of these items bear the signature of one of Goold’s colleagues or close associates. Examples of this include John Fitzpatrick (or the initials JFP) (1810-1890), Patrick Bonaventure Geoghegann (1805-1864), and John Ignatius Bleasdale (1822-1884). Bleasdale was one of Goold’s private secretaries. Geoghegan was Goold’s vicar-general for a time and went on to be appointed bishop of Adelaide. Fitzpatrick was Goold’s right hand man for 38 years and administrator at St Patrick’s Cathedral from 1858-1879. Some books added to the Goold Collection include both Goold’s imprint as well as the signature of one of his associates on the same item.